THE STORY OF WICKS FORGE is one of seemingly random events and choices that have interconnected over time, weaving together family ties, tradition, legacy and artistry.

Nicholas Wicks Moreau is the 26-year-old founder of Wicks Forge and its sole blacksmith artist. He is one of three generations of metal workers within the Wicks family. William P. Wicks, Nick’s great-grandfather, was a pioneer in the metal and welding business in the early 1900’s. He founded Wicks Welding and then Wicks Products in New York City. Additionally, William ran a welding school, training both male and female welders for the US efforts in WWII. William’s son Edward, Nick’s grandfather, attended this program and continued on in the welding business. Eventually Edward retired, storing many of the welding tools in his garage in Danbury, CT. As time went on the tools became intermixed with many other artifacts of the Wicks family’s life.

This is the story of a family’s unique creativity and artistry. Nick’s grandfather played cello in the Danbury Symphony Orchestra. He also became a self-trained luthier, repairing stringed instruments, and continued this work after he retired from the welding business. Nick’s grandmother was a Julliard-trained opera singer before marrying and having a family. Nick’s mother is an artist and musician, and his father is a carpenter. Nick grew up surrounded by craft, artistry, and creative expression. His own early creative exploration included carpentry, wood- fired ceramics, photography, and block printing, although he insists his stellar lacrosse talents showcased his creativity as well!

It’s also a story of serendipity. Before leaving for graduate school in Scotland in 2011, Nick visited a friend who was a potter. Fooling around, Nick heated some metal fragments in the kiln and played with making shapes. “You should find a blacksmith in Scotland and learn about the trade,” his friend said. In Scotland Nick did just that, “cold calling” a well-known artisan-blacksmith and asking if he might meet him. Once at the blacksmith’s shop, Nick hoped for the chance to “do anything, even sweeping the forge” – and for free! “The Blazing Blacksmith,” as he was known professionally, said no to the offer. On the bus ride back to school, Nick figured it was a lost cause. But three weeks later he got a call from the blacksmith saying he’d thought it over. If Nick was still interested, he could come to the shop for a week and see how things went. Nick remained there as an apprentice throughout graduate school. He learned how a master craftsman approaches his work and his art. Nick now had the foundation for a craft and a trade.

Finally, this is a story of family relationships and bonds. Nick had not planned to return to the U.S. immediately after school. However, his life changed when it became apparent that his aging grandparents could use some help. Nick made the decision to move back to Connecticut. While cleaning out his grandfather’s garage filled with two cars, old papers, crates, and boxes, Nick found his great-grandfather’s welding table, anvil, and other iron-working tools. He established Wicks Forge in 2013.

The Wicks family legacy of creative expression, combined with serendipitous events in Nick’s life, have intertwined to forge a path for Nick’s artistry. An original photograph of Nick’s great-grandfather, William P. Wicks, at work.
His photograph is prominently displayed in Nick’s forge today. 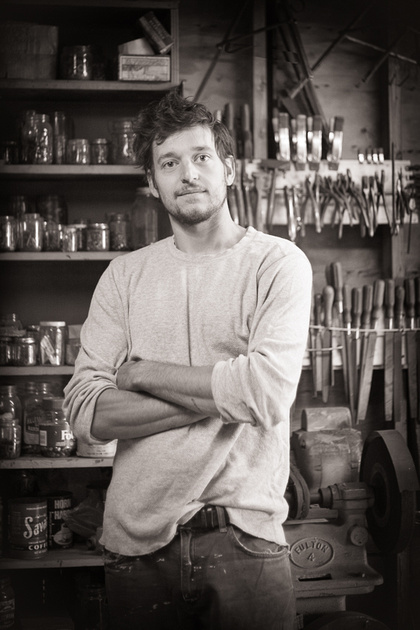 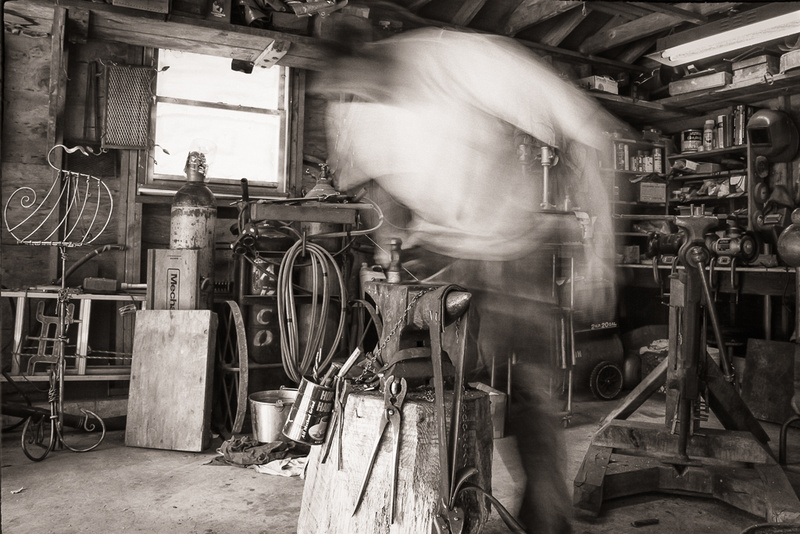 From forge to anvil to cooling water bucketand back again, over and over as the metal is worked and shaped. Strike While the Iron’s Hot

This anvil belonged to Nick’s great-grandfather. Like many family items, it comes with a story: “Everyone in my family talks about it: there used to be a ‘man’ test that everyone would have to try if they came to the shop, and that was to grip the smaller anvil by the ‘horn’ and lift it over your head with one hand. As far as I know, my great-grand father was the only one who was able to do it.” Blacksmiths are known for making their own tools. The forge, used to heat the metal to high temperatures, is Nick’s own creation. The shop’s “desk” is his great-grandfather’s handmade welding table. 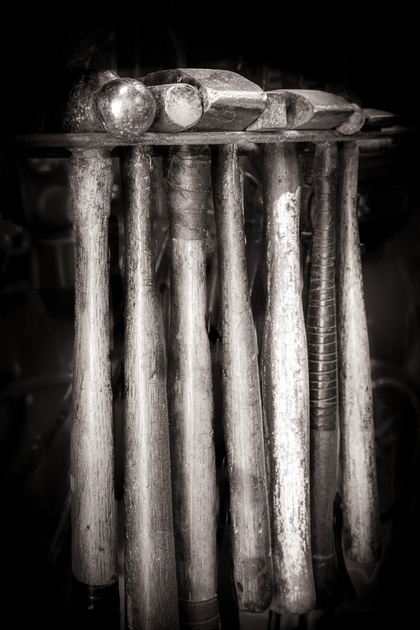 Worn and Polished Over Time

Forging is the process through which metal is shaped by striking it with a hammer against an anvil. Brute force is not required; controlled and directed force is the requisite skill. 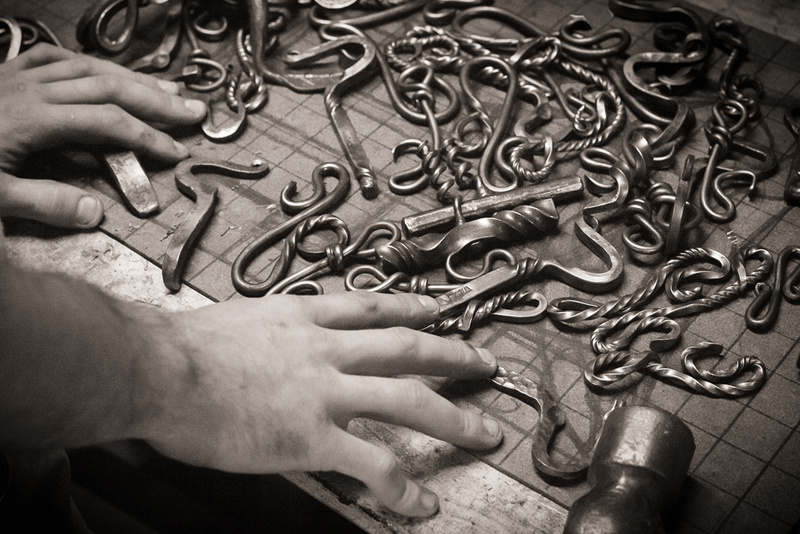 Shapes are part of an artist’s language. Nick creates shapes that speak of the rhythms of time, life, and the natural world. “There are two men inside the artist, the poet and the craftsman. One is born a poet. One becomes a craftsman.” 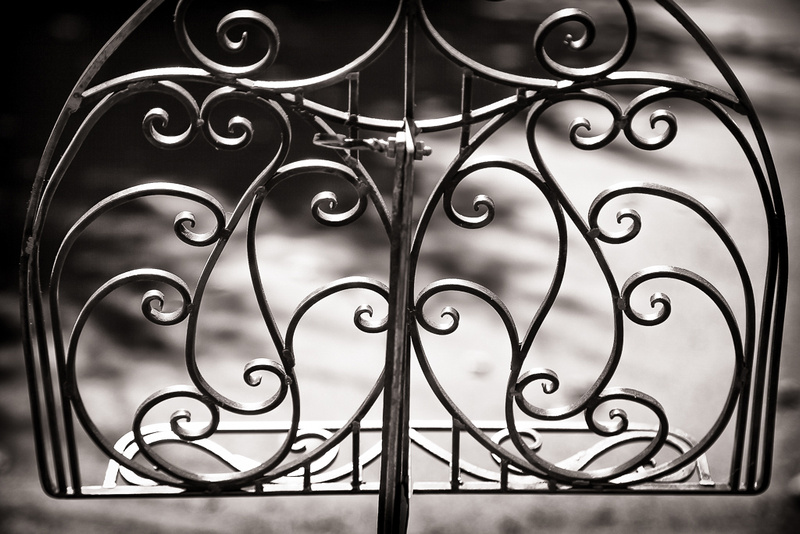 There is an intriguing dichotomy between the forging of hard metal by intense heat and directed force, and the creation of such 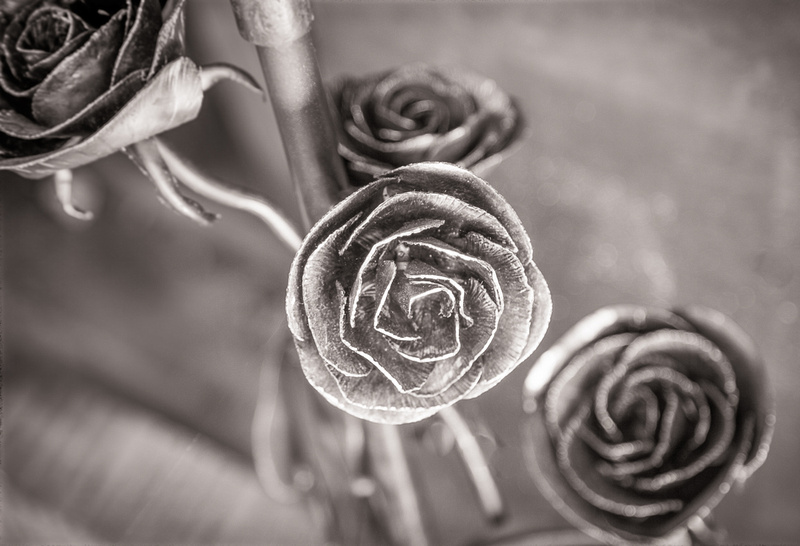 A delicate vine of roses and leaves serves as the intricate base for the Gothic Rose music stand. Nick’s artistry has grown“beyond trying

to make something that looks cool.” He now strives to produce art which also expresses his perspective about life.

This project is available for sale as a 12 page folio: an archivally printed, 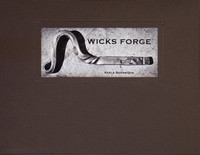 THE PRICE IS $50, SHIPPING WILL BE ADDITIONAL

All printing is done with archival Epson inks.