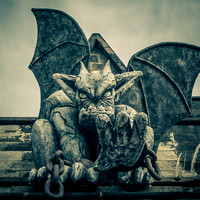 Eastern State Penitentiary, known to insiders as ESP, was built in 1826 in Philadelphia.  It is one of the oldest penitentiaries  in the United States. Currently maintained as a ‘preserved ruins’ it is registered as a National Historic Landmark and open to the public as an historical and cultural resource.  It's Gothic style of architecture plus the soaring cell block corridors, minimal natural light, peeling paint, and crumbled walls are a photographer's delight. The physical ruins and haunting atmosphere appealed to me immediately and kept my interest for hours while taking these photographs. I usually know a photo session is ‘working’ when I lose track of time and feel the hairs on the back of my neck rise–although this particular setting may have added to the hair-raising sensation. 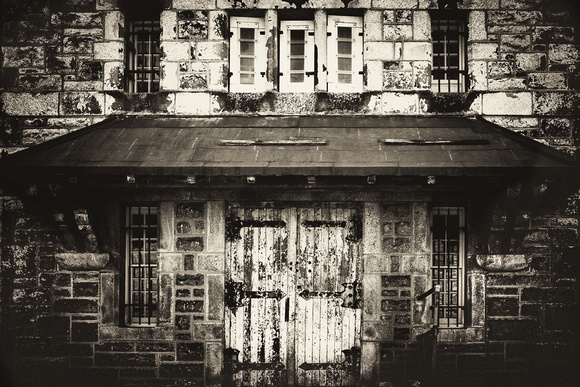 In 1829, Eastern State Penitentiary represented a new, enlightened approach to prisons as well as prisoners and was likely influenced by Pennsylvania's Quaker heritage. Prisons would not just punish but would rehabilitate the prisoners through the use of isolation, long hours of labor, and spiritual reflection. 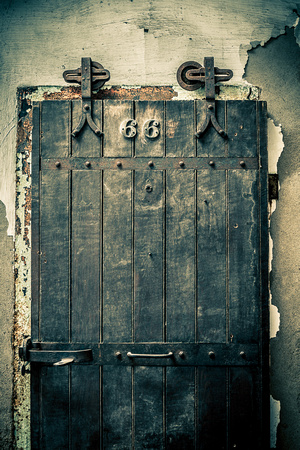 The original cell door consisted of an iron door covered by a thicker wooden door.

Strict isolation played a key role in the ‘enlightened’ philosophy of the day.  Speaking to other inmates or to guards was forbidden.  For anonymity, and to avoid distractions, hoods without eyeholes were worn by prisoners when they left their cells. Meal trays were slid through a wall slot, limiting the prisoners' view of the guards. All prisoner labor (shoemaking, sewing, weaving) was done alone, inside the prisoner's cell. No visitors, letters, or books were allowed. The only interaction was designed to be between the prisoner and God.

John Haviland, the architect of Eastern State, carried this philosphy into his design. He created single cells 8 x 12 x10 feet with metal doors which were then covered by thick wooden doors. The only light came from a sky-light in each cell, allowing in ‘heaven's light.æ Outside each cell was an exercise area the same size as the cell and surrounded by a ten foot wall, reinforcing the isolation of each inmate.

At the time of construction, ESP was considered the most modern public building in America.  Each cell had heat, running water, and a toilet with a flushing system. Even the White House in 1829 did not have such amenities. 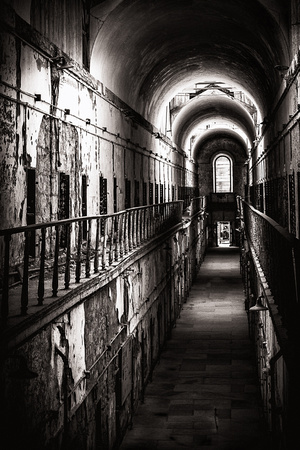 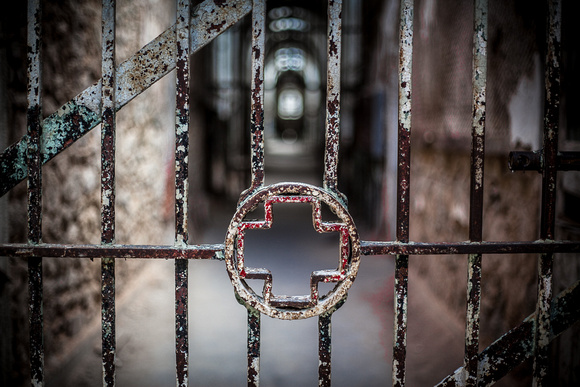 Entrance to the Hospital Wing

In 1903 the conversion of one of the original seven wings into a ‘modern’ hospital wing was completed.

Eventually this area had operating rooms, recovery rooms, and labs as well as general medical beds.

In 1929 Al Capone had his tonsils removed here!

As I walked the hallways, the visual ruin and neglect, great for my style of photography, gave me a visceral feeling of tortured and ruined souls. It seemed I could feel their feet on the worn stairs and their hands on the bannisters. 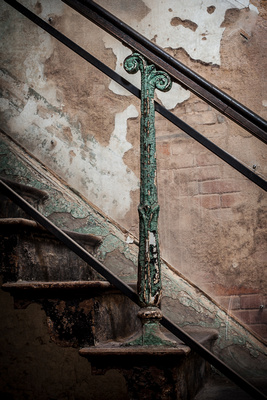 It wasn't long before over-crowding problems coupled with society's waning support for isolation as a path to good behavior led to the demise of the solitary system.  In 1905 a group workshop was established for the prisoners; soon the exercise areas were eliminated to allow for new cell blocks to be built; what had been solitary cells became 2-3 man cells. By 1909 several penitentiary baseball teams thrived. In 1913 the solitary system was offically abandoned.  ESP evolved into the type of prison we are more familiar with from the movies of the 50's and 60's. Many infamous inmates, including Willy Sutton and Al Capone, served time here. In 1971 Eastern State Penitentiary closed. Today it is a popular tourist attraction in Philadelphia.